Skip to content
By Associated Press
Source: https://www.voanews.com
————————————————————————————-
WASHINGTON, D.C. – In the first month of Donald Trump’s presidency, an American scholar quietly met with North Korean officials and relayed a message: The new administration in Washington appreciated an extended halt in the North’s nuclear and ballistic missile tests. It might just offer a ray of hope.

The February launch heralded a year of escalating tensions that have left the U.S. and North Korea closer to hostilities than at any time since the Korean War ended in 1953. The North is now at the brink of realizing its decades-old goal of being able to strike anywhere in America with a nuclear weapon. And two leaders untested in the delicate diplomacy of deterrence have exchanged personal insults and warned of the other nation’s annihilation. 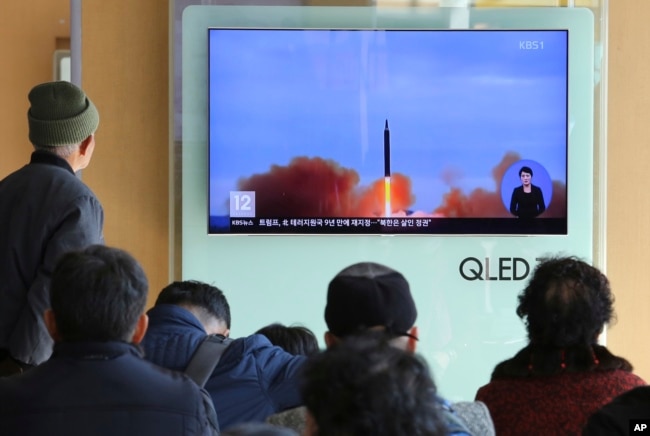 “Pyongyang and Washington are caught in a vicious cycle of action and reaction,” Korea expert Duyeon Kim wrote in the Bulletin of Atomic Scientists. “If nothing happens to break the cycle, it will continue until one side either stands down, which is very unlikely, or, far worse, takes military action.”

The exchanges at the unofficial U.S.-North Korean talks 10 months ago hadn’t been reported before. They were recounted to The Associated Press by a participant who requested anonymity to describe them. No U.S. government officials took part.

Although North Korea at that time signaled interest in talks with Washington, its uncompromising position made plain the challenges Trump faced as he entered the White House, promising to sort out the North Korean “mess” he inherited. It also underscored how much difficulty the U.S. has experienced gauging the North’s thinking.

Before his inauguration, Trump blithely tweeted about the prospect of Kim having a nuclear-tipped missile that could strike America: “It won’t happen!” Almost a year later, and after an onslaught of new economic sanctions and U.S. military threats, the nuclear menace from Pyongyang is far worse.

And U.S. strategy is muddled. Secretary of State Rex Tillerson recently offered unconditional talks with North Korea only to be quickly shot down by the White House, where not only Trump has talked up the possibility of military confrontation. National security adviser H.R. McMaster also has warned the potential for war is “increasing every day.”

I told Rex Tillerson, our wonderful Secretary of State, that he is wasting his time trying to negotiate with Little Rocket Man…

Shortly before Christmas, the administration unveiled a new security strategy that offered few answers. It vaguely spoke of “improving options” to get the inscrutable North to abandon its nuclear weapons.

By the administration’s own admission, its official North Korea policy of “maximum pressure and engagement” hasn’t to date included significant engagement.

“The White House and the secretary of state seem unable to coordinate on even the most basic elements of a common strategy,” wrote Stephan Haggard, a North Korea expert at the University of California, San Diego.

The U.S. has scored successes in its international pressure on North Korea. It has won cooperation from the North’s traditional backers such as China and Russia on restrictions that have put new strains on an economy Kim has promised to modernize in his half-decade as leader. The U.S. also says more than 20 countries have curtailed diplomatic ties with Pyongyang. But Trump this past week strongly criticized China for still allowing oil supplies to North Korea, highlighting the likely limits on Beijing’s willingness to put the squeeze on its unpredictable neighbor. So far, pressure hasn’t accomplished the stated goal: forcing the North to abandon its nuclear weapons program or, at least, to enter negotiations over such a possibility. Kim has remained focused on developing a nuclear arsenal he views as guaranteeing regime survival. And his program advanced leaps and bounds during 2017.

After a rash of failed missile tests last year, North Korea has conducted more than 20 missile launches since Trump came to office. It also tested what it described as a hydrogen bomb — an underground blast so big it registered as a 6.3 magnitude earthquake. Then in late November, it test-fired a new intercontinental missile in the clearest demonstration yet that all of America was within its striking range.

Trump has compounded the world’s sense of alarm. While he has presented his own threats as proof of an America that won’t be intimidated, critics at home and abroad have argued that he has elevated the risk of nuclear conflict through his personal insults to Kim.

Being nice to Rocket Man hasn’t worked in 25 years, why would it work now? Clinton failed, Bush failed, and Obama failed. I won’t fail.

Trump has called Kim “short and fat” and “a sick puppy.” At the U.N. in September, he lampooned Kim as “Rocket Man … on a suicide mission for himself and for his regime.” Kim replied by calling Trump “mentally deranged” and a “dotard.” North Korea’s foreign minister then warned of a possible atmospheric nuclear test — done by no nation since 1980.

Diplomacy isn’t dead, however. The Trump administration was quick to restore a back channel for talks between the State Department and North Korea that disappeared in President Barack Obama’s final months. The U.S. envoy on North Korea, Joseph Yun, secretly met North Korean officials in Oslo in May to press for the release of Americans imprisoned in Pyongyang.

But the only release was college student Otto Warmbier, who had suffered brain damage in detention and died days after his return. Warmbier’s shocking condition ended any hopes of a thaw. Trump tweeted angrily and Pyongyang promptly stepped up its weapons tests.

As 2018 beckons, the question now is whether the North will conduct more tests until it can confidently deploy its new long-range missile, and whether it will detonate a nuclear weapon over the Pacific to demonstrate once and for all its capabilities. That would dramatically increase the chances of war.

The Trump administration sees the time for diplomacy shrinking. Tillerson said in December he hopes sanctions get North Korea to negotiate.

“Otherwise, we wouldn’t need to do this,” Tillerson said of all the pressure. “We’d just go straight to the military option.”