Hong Kong – Hundreds of police with power tools tore down protesters’ barricades on Queensway in Admiralty this morning, following a swiftly executed dawn operation to remove a number of blockades in Causeway Bay.

In Tseung Kwan O, anti-Occupy protesters defied a court order and once again blocked the entrances to the Apple Daily newspaper headquarters, delaying the paper’s delivery for a second day.

12am: And with that, we’re wrapping up today’s live blog. It’s been an action-packed last few hours, with the re-occupation of Lung Wo Road in Admiralty and speculation that police are planning to tear down barricades in Mong Kok early on Wednesday. We will resume the live blog at 5am, so stay tuned for all the latest on the pro-democracy protests.

11.50pm: The top mainland representative in Hong Kong said Beijing had “prepared for the worst” fearing the Occupy Central protests would drag on “for some time”.

Zhang Xiaoming, director of the central government’s liaison office in Hong Kong, made the remark to members of the city’s main pro-government party in Shenzhen on Sunday, but did not elaborate.

Watch: Protesters re-occupy Lung Wo Rd. in Admiralty after clash with police

11.45pm: A student from Polytechnic University said pro-democracy protesters’ “re-occupation” of Lung Wo Road is a “small victory” for the movement, especially after police tore down the barricades on Queensway this morning.

The road is adjacent to the avenue that fronts CY Leung’s office. “We expressed our sincerity when we left Lung Wo Road [last week]. We are forced to take it back … We need more bargaining chips [for future talks],” said the student.

Lau I-lung, a spokesman for the student activist group Scholarism, said neither they nor the Federation of Students initiated the move to reclaim the road. He said they were only observers.

But he said authorities “ambushing” protest zones, removing barriers and refusing to speak to students might have triggered the latest events. “I think tonight’s action was triggered by this,” he said.

Several hundred protesters are gathered in front of the chief executive’s office, while others are setting up layers and layers of fencing and concrete boards on Lung Wo Road, where all lanes are now blocked. 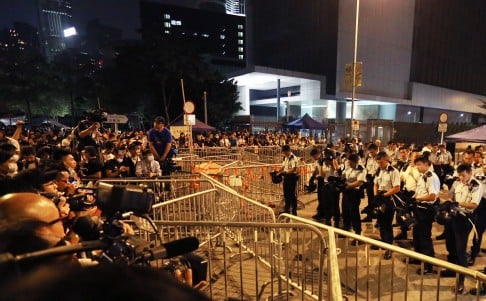 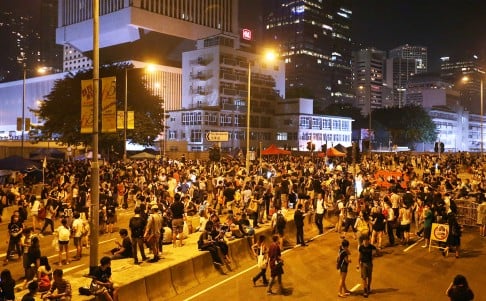 11.30pm: Causeway Bay: There’s a more alert atmosphere in Causeway Bay after news of the tense stand-off on Lung Wo Road. More police, numbering around 100, have been deployed to the area.

11.15pm: Mong Kok: Protesters were almost hit when bags of rubbish were hurled from a nearby building. The white bags were filled with what looked like dead insects and leaves, and oozed with a yellow-brown sludge.

Kate Wong, a witness, said: “I heard a loud noise and when I walked over, I saw people had scattered and some people were washing brown stuff off their arms.”

Police set up a cordon and some officers were sent up to the building, Cornwall Court, to investigate, but they were not allowed in by security guards. Protesters have surrounded the building, demanding that the guards allow the officers in.

It had been largely uneventful all evening, with dozens of anti-triad police clad in black vests patrolling the area.

People Power legislator Albert Chan Wai-yip and fellow member Tam Tak-chi had earlier urged protesters to “take Thursday off” from the camp and help other protesters in Admiralty surround the Legislative Council complex, on the day that Leung Chun-ying will face a question-and-answer session with lawmakers.

“We must prevent him from leaving until he answers for his secret HK$50 million payout,” Tam said. “This is another way we can scale up this movement.”

Meanwhile, TV crews are watching a thin barricade at the junction of Nathan Road and Dundas Street, in case that is the starting point when police swoop in to clear blockades.

11.05pm: Lung Wo Road remained blocked off to traffic. Protesters have moved in more barricades to seal off the road, effectively expanding the Admiralty protest site. 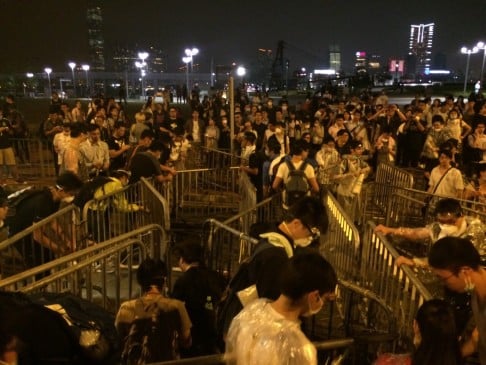 10.50pm: More on how the stand-off on Lung Wo Road started: A dozen students had rushed to the westbound side of Lung Wo Road, with one of them climbing onto a road barrier between the west and eastbound lanes. He was pulled back by policemen.

Fearing he would be arrested, crowds rushed in to shield him with umbrellas. More protesters came in from both sides of the road, ignoring the vehicles that were still passing.

In response, police raised a red flag and brought out their batons.

10.44pm: Protesters have cleared a lane so police could retreat. The crowds started cheering as officers began backing away and making their way to the government headquarters nearby. Police are setting up more barricades there.

WATCH: Crowds cheer as police retreat after a clash on Lung Wo Road

10.14pm: Admiralty: Dozens of police with batons, helmets and shields arrive after protesters rushed to Lung Wo Road, triggering a stand-off.

Police wanted to arrest one protester and more officers came for back-up, reporters at the scene said. The officers were carrying batons and a flag that warned people not to cross police cordons.

Police were momentarily surrounded, however, when hundreds of protesters arrived, chanting and jeering. One officer pleaded for calm and for the demonstrators to disperse peacefully.

However, police began pushing protesters at the Central-bound side of the road, and one or two protesters were hit with batons.

The Federation of Students said pepper spray was fired at the site, and some journalists reported being hit, according to initial reports. 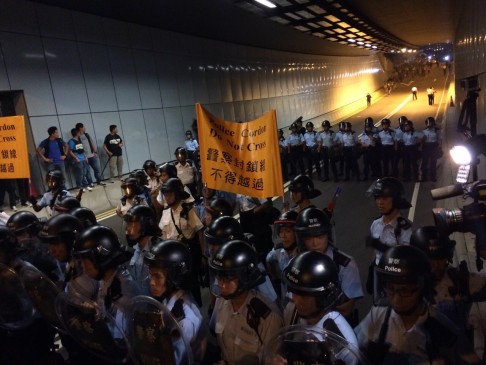 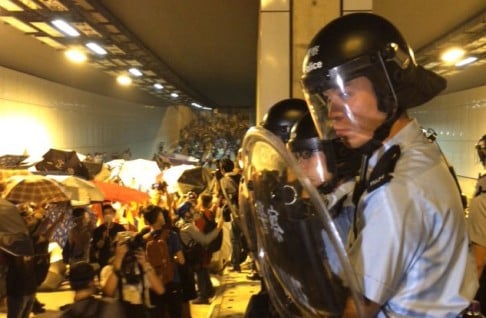 “The security guard checked my bag … and found the placard. They refused to let me in, and said this is the order from their superiors,” said Wong Man-lee, 26, who paid HK$1,800 to watch the game.

Wong said she got the placard, featuring a yellow umbrella and the words “support Hong Kong”, from people distributing them near the stadium.

“[The guards] said I could put it down and get it back when I leave. They also said the placard was provocative, but I just don’t understand that,” said Wong, who was allowed in when she dropped the sign.

Wong said “hundreds of other fans with the placards” were refused entry. She asked to meet a representative of the Hong Kong Football Association about it, to no avail.