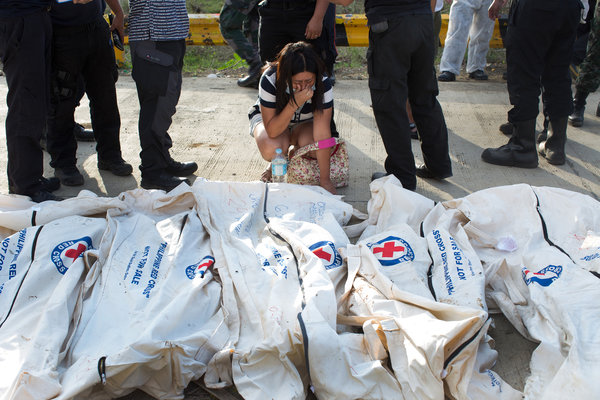 Mary Joy Ducusin cried over the body of her 6 year-old son, Jairo Ben Ducusin, next to a cemetery, outside Tacloban.

CEBU, Philippines — The official death toll for Typhoon Haiyan has exceeded 5,200, confirming that the devastating storm was one of the Philippines’s deadliest ever recorded.

With the jump in the numbers of dead Friday, the storm for the first time officially reached the levels of Tropical Storm Thelma, which killed at least 5,000 people in 1991, and the toll from Haiyan is likely to continue to grow. The counting method used is considered conservative, and government figures also show that 1,611 people are still listed as missing.

The death toll has been a contentious issue since the early days of rescue efforts after the storm, when a high estimate of 10,000 dead added to the notion that the government had been caught flat-footed by the typhoon that devastated the central Philippines. President Benigno S. Aquino III at the time played down reports of the higher possible death toll, suggesting that 2,000 or 2,500 might be more realistic.

Mr. Aquino attributed the larger figure to the “emotional trauma” experienced by those providing the estimates. The police official considered responsible for the number was “relieved from his post,” the official Philippines News Agency reported.

On Friday evening, the National Disaster Risk Reduction and Management Council said Haiyan had killed 5,209 people. The agency counts only those corpses that have been logged by authorized officials.

That number was up from the 4,011 dead reported by the government on Wednesday. The council reported that 23,404 people were injured by the storm.

Most of the deaths from Typhoon Haiyan were recorded on the island of Leyte, included 1,725 in its badly damaged capital city of Tacloban.

On Friday, Manuel Roxas II, the nation’s interior secretary, likened the disaster-hit area to a badly injured patient that had stabilized enough to be moved out of the emergency room. “The worst is over,” he told a news conference in Manila.

The major streets of Tacloban are now almost completely cleared of debris, although may side roads remain snarled. The government said that about half of the total amount of debris has been removed.

Despite such signs of improvement, the storm continued to cause suffering. More than 4 million people were displaced from their homes, and many are now living in emergency shelters like schools, government offices and the Tacloban City Convention Center.

In Tacloban’s Barangay 88 neighborhood, its worst-hit district, many residents from some of the city’s poorest areas are now living in badly damaged buildings with mud from the storm still covering floors.