This is a great article from the Wall Street Journal, by Joe Ray, on different locations to try Pho (Vietnamese traditional beef noodle dish) in Vietnam. 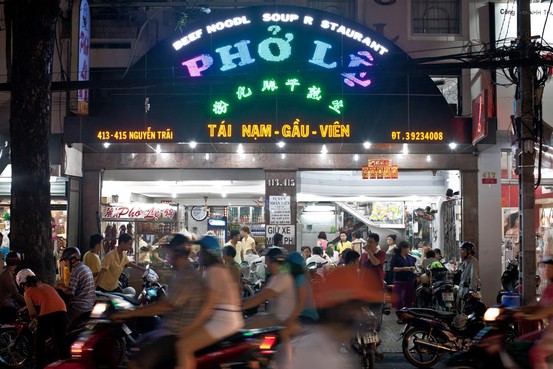 MY FIRST LESSON in pho came during a jet-lagged breakfast the morning I arrived in Hanoi, the old-meets-new capital of Vietnam.

“Eat it now,” said my waitress, pointing to the bowl she had just set down. Firm as a general but polite as can be, she wanted me to know that the noodles in my soup would remain in their perfect state only for a moment.

Vietnam’s signature dish appears simple: rice noodles swimming in broth, topped by a bit of meat (usually beef) and accompanied by a plate of garnishes like greens, sprouts, lime wedges and hot pepper slices. But pho, once a special-occasion meal, possesses deep and complex flavors, the result of an elaborate preparation process.

The origins of pho are shrouded in mystery. Its name may have roots in the French pot au feu (pho and feu are both pronounced “fuh”). Then again, the soup may have originated in the northern province of Nam Dinh. Or it might have come from China.

Regardless of where it was born, pho’s spiritual home is Hanoi. In this densely packed northern city that rises with the sun and quiets when it sets, many vendors ride around town on their bicycles, with woven trays of tiny limes, garlic and blistering hot peppers on the handlebars. People gobble the soup morning, noon and night—and they are possessive about it.

“Pho is a particular gift of Hanoi,” Vietnamese writer Thach Lam penned back in the 1940s, displaying an attitude that hasn’t changed much since. “Not because only Hanoi has it, but because only in Hanoi is pho delicious.”

Of course, at the other end of the country, in clamoring, cosmopolitan Ho Chi Minh City (formerly Saigon), citizens beg to differ. The two cities make very different styles of pho—and the competition between them is fierce.

My pho fascination started far from Vietnam, in Cambridge, Mass. Pho was little known on American shores in the late 1990s, when chef Didi Emmons opened Pho Republique in then-gritty Central Square. My dinner there was so good that I asked for (and got) a part-time job in the kitchen.

I had cooked in plenty of restaurants, but had never made anything like pho. I was riveted by the drawn-out process of creating the broth, from charring onions and ginger in the bottom of a mammoth stockpot to smashing lemongrass with a metal ladle to release its flavor, to the way the broth bubbled away overnight, slowly yielding the flavors that make it the wine of the soup world.

In northern Vietnam, Hanoi’s pho is as austere as a classic Burgundy. It comes with a clearer broth, rarely strays beyond beef and is crowned with a Spartan sprinkling of just-picked scallions and chives. “We eat very fresh food here,” said Mai Corlou, who runs Madame Hien restaurant, explaining the local predilection for letting ingredients speak for themselves. “We go to the market every day and want to see our fish killed for us and our chicken still alive.”

Hanoi’s best pho shops are concentrated in the narrow, shop-crammed streets of the Old Quarter. What seems like the entire population buzzes by on scooters as customers slurp away at their soup. A visitor might shy away from the curbside restaurants, but they are open-air marvels of efficiency, ingenuity and mise en place: a line cook’s dream, where everything is set up in bowls, ready to put together in an instant.

Ho Chi Minh City’s pho is the garage wine of Vietnam’s scene, foregoing refinement for big flavors. This rich, cloudy soup is accompanied by a thicket of sawtooth herb, basil, mint and sprouts that you tear up with your hands and add to the bowl.

In this up-all-night town, a hungry, thrifty eater and his friends can be in and out of a world-class pho joint in 10 minutes.

“This place is for truck drivers,” Mai Truong, a food-centric guide, told me at Pho Tau Bay, a utilitarian place on a major thoroughfare. That’s partly because the restaurant opens at 3 a.m., allowing truckers to stop in for a meal before the city closes to big rigs at 6 a.m. Our table was pre-loaded with a large plate of greens; the broth was ladled from vats big enough to bathe in. The house specialty is pho with rare tenderloin and braised rib meat. It was fantastic—the kind of stuff that, at about $2 a bowl, makes it easy to understand why high-end dining is a fringe activity in Vietnam.

I buzzed around Ho Chi Minh City, from the modern center to French Colonial sections that still seemed straight from a Graham Greene novel, slurping bowl after amazing bowl of soup. I capped the night at Pho Lê near Chinatown, where the streets were mobbed with teens on scooters out for an evening cruise. Pho Lê serves southern-style soup with a bit of sweetness, cut with a squeeze of lime and a hit of heat.

“How many bowls is that? Eight?” asked a waitress who learned that I was on a quest.

“Enough,” I answered, lifting my spoon and chopsticks. Along with brisket and raw loin slices, the soup held spoon-formed beef balls, bursting with flavor and so tender they barely held together. I realized that the pho in Ho Chi Minh City is so consistently good that I was ready to declare the heretical: Hanoi may be a pho purist’s dream, but the pho is better down south.

An oldie and a goodie in a formerly Chinese section of District 5. The street and sidewalk here are flooded with pedestrians, merchants and scooters long into the night. The hand-molded beef balls are a highlight in what is one of Ho Chi Minh City’s best bowls of pho. 413-415 Nguyen Trai, 84-8-3923-4008 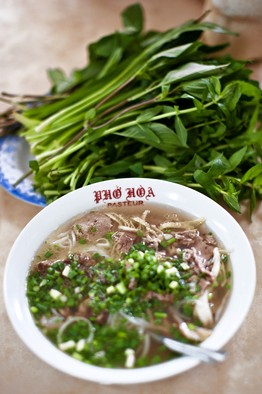 Here, at the granddaddy of baroque goodness, a warren of rooms is opened up consecutively as the place fills up. Try the special—an extravaganza of tripe, beef balls, brisket, tendon and raw loin, to which you can add banana-leaf-wrapped pork sausages. The broth is rich, with a buttery texture from beef marrow. This is a feast in a bowl. 260C Pasteur, 84-8-3829-7943

“Pho for the President,” is the motto of the spot where Bill Clinton stopped for a bowl in 2000. While seafood pho may be a heresy, it’s also a mean dish, here served up in a McDonald’s-esque indoor dining room. Mr. Clinton managed to indulge in some serious soup while promoting reconciliation between the U.S. and Vietnam. 1-3 Phan Chu Trinh, 84-8-3822-4294 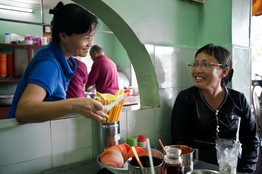 This truckers’ favorite in District 10 specializes in a version of beef pho with rare tenderloin and braised rib meat. When it’s busy—which is most of the time—clients eat at tables in the adjoining alley. Word is, the restaurant goes through some 200 pounds of beef a day. 433-435 Ly Thai To, 84-8-3834-5128

The Pop-Up Spot: No Name

At lunch, the pho at this nameless spot in a university neighborhood is adorned with slices of raw meat that cook in the bowl. You can get beef balls after 5 p.m., but don’t come much later—the space is rented to another business when this shop calls it quits for the day. The noodles here are finer than at other spots. You can also get a fresh-pressed sugarcane juice with kumquat from the neighboring stall. 7 Nguyen Thai Binh 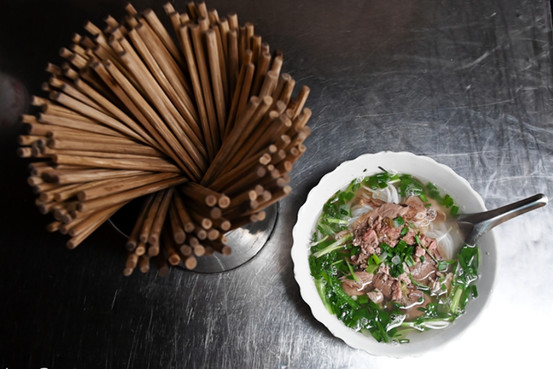 This eatery, located alongside peaceful Lake Hoan Kiem, where innumerable Hanoians do their morning calisthenics, defines “hole in the wall” with its dark dining room, stainless-steel tabletops and wooden benches. But the broth is redolent of smoky ginger and the noodles absorb its flavor without becoming mushy. Opened in 1949, the shop is now run by the founder’s eldest son, who closely guards the family recipe. 61 Dinh Tien Hoang

The big draw at this multi-generational establishment is the deep-colored broth, cooked in a fire pit in the alley adjacent to the kitchen. If the meter maids come by, half the restaurant clears out to move their illegally parked scooters. Inside, a cook with a cleaver makes quick work of the brisket and the pho is very northern-style—no plate of sprouts and leaves, just a tiny bucket of hot sauce and another of garlic-laced vinegar to emphasize the soup’s clean flavors. Come early—they usually sell out by 10 a.m. 49 Bat Dan, 84-9-2429-2236 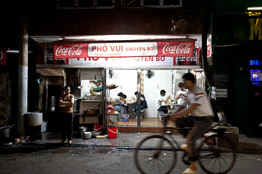 If it weren’t for the tables full of people and the kitchen that starts inside and spills out onto the sidewalk, this Old Quarter spot, with white walls, stainless-steel surfaces and excellent beef, could be confused with a butcher shop. The broth is simple, elegant and clear, and the marbled brisket has a near-sweet flavor. 25 Hang Giay, 84-9-8401-7741