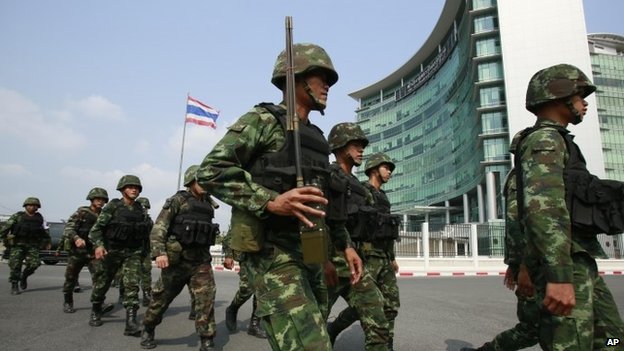 The military said it was taking the dramatic step in the interests of law and order
The Thai army says that it is imposing martial law amid political crisis “to preserve law and order”.

The army has also granted itself wide-ranging powers to enforce its decision.

The military, which last took power in 2006, stated that the move which gives the army control of nationwide security was not a coup.

Martial law comes after a long-running political crisis, and months of escalating tensions between the government and the opposition.

An announcement on military-run television said that martial law had been imposed “to restore peace and order for people from all sides”.

“The public do not need to panic but can still live their lives as normal,” the announcement said.

Thailand is mired in political mayhem, with the opposition demanding that power be handed over to an unelected administration charged with rewriting the constitution.

Correspondents say that the imposition of martial law could enrage supporters of the government, especially if it is seen as amounting to a coup.