BANGKOK (Reuters) – A 39-year-old motor parts billionaire and extreme sports enthusiast seeking to shake up Thai politics has been compared to France’s Emmanuel Macron and Canada’s Justin Trudeau for his youth.

But Thanathorn Juangroongruangkit sees little prospect of emulating their electoral success even if the junta, which seized power in a May 2014 coup, holds elections as promised next year after several postponements.

Mr Thanathorn launched his Future Forward Party this month with a big fanfare and a promise to appeal to the youth vote.

Thanathorn Juangroongruangkit unveils the ‘Anakhot Mai’, or Future Forward Party, at Warehouse 30 on Charoenkrung Road before filling an application to register the party with the Election Commission, on March 15, 2018. (Bangkok Post photos)

But the forces that have divided Thailand for a generation are also mobilising – and making plain their enduring presence four years after the coup that ousted a ‘red’ populist government in the name of ending turmoil with a ‘yellow’ royalist elite.

Mr Thanathorn’s party had not even been formally launched before he came under attack from ultra-royalists.

“Future Forward… It is the future for those who want to impede the rights of the king,” Rienthong Nanna, a retired major general, wrote on Facebook.

Mr Thanathorn declined comment on the monarchy – a subject few dare speak of given the world’s harshest lese majeste, or royal insult, laws.

He has previously dismissed accusations of being anti-monarchy although his party has also received praise from some of Thailand’s most vocal exiles.

“The party offers an alternative path,” prominent exiled academic and junta critic Pavin Chachavalpongpun told Reuters. “It’s a phenomenon that should have happened a long time ago.”

Since student days, he has been part of campaigns against poverty and inequality though in recent years he has spent more time helping run the Thai Summit Group founded by his late father and running ultra-marathons in the Arctic and the Sahara.

His emergence comes as the junta starts registering parties ahead of a frequently delayed election now set for 2019. Whether his party will win registration is still in question.

Political success in Thailand depends on being able to placate the military and royalist elite, said Joshua Kurlantzick of the US-based Council on Foreign Relations.

“In France, there was no junta stopping Macron forming a party,” he told Reuters.

Maj Gen Piyaphong Klinphan, a junta spokesman, said registration was a matter for the election commission, but the junta would make sure nobody could disturb security or break the law.

It has been widely noted in Thailand that Future Forward’s orange colour is a mix of the red and yellow of the old rivals, although the party has said this is unintentional.

In the “red shirt” camp are supporters of ousted former prime minister Thaksin Shinawatra, the last billionaire to shake up Thai politics, whose populist policies won support from farmers, the poor and the heavily populated northeast.

The “yellow shirt” camp represents the traditional privilege of the Bangkok-based establishment, strongly pro-army and pro-monarchy. 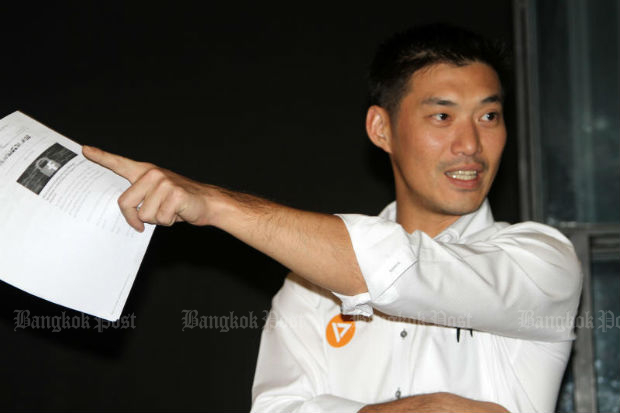 “We need to convince people from all colours to come back and have faith in parliamentary democracy,” said Mr Thanathorn, a father of three.

His policies include business deregulation and moving decision-making out of Bangkok. Mr Thanathorn distances himself from the populism of Thaksin, who was overthrown in 2006 and fled to escape a corruption conviction he says was political. Thaksin’s sister, Yingluck, was ousted in the 2014 coup.

One of Mr Thanathorn’s uncles, Suriya, served as transport minister under Thaksin and politicians from Thaksin’s camp have been more welcoming of Thanathorn’s party than the ultra-royalists.

But Mr Thanathorn’s party has barely started to build the grassroots structures that helped parties linked to Thaksin win every election since 2001.

In a pro-Thaksin stronghold in Bangkok, only a few kilometres from where Mr Thanathorn launched his party, most of more than 20 people asked by Reuters said they had not heard of him.

All said they would stick with the Pheu Thai Party, whose leaders flew to Hong Kong and Singapore last month for meetings with Thaksin that participants said had focused on preparations for the elections.

“My friends and I will still vote Pheu Thai,” commented one 58-year-old “red shirt” who gave his name only as Na. “I don’t want a young man to lead the country.”