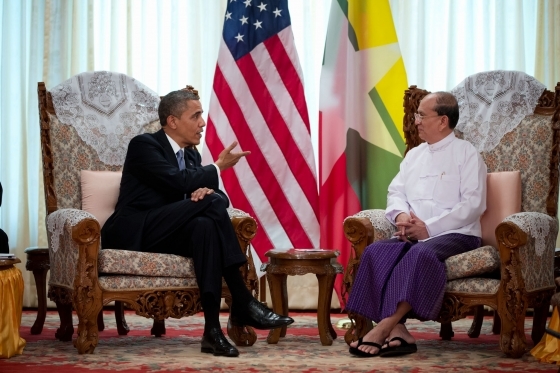 On November 17, President Obama embarked on a historic 3-day trip in Asia, his fifth to the region, marking the first-ever visit by a U.S. President to Burma and Cambodia.

President Obama’s first stop on the Asia trip was in Bangkok, Thailand, where he visited a Buddhist temple at the Wat Pho monastery, met with Thai King Bhumibol Adulyadej, held a joint press conference with Thai Prime Minister Yingluck Shinawatra, and enjoyed a dinner hosted by the prime minister at the Government House in Bangkok. Read more about the President’s visit to Thailand here.

President Obama then made a historic visit to Rangoon, Burma, where he met with President Thein Sein for a bilateral meeting at the Parliament Building, visited Nobel Peace Prize winner Aung San Suu Kyi, and delivered a speech to encourage Burma’s ongoing democratic transition at the University of Yangon. Read more about the President’s speech in Burma here.

President Obama made the final stop on his trip to Asia in Phnom Penh, Cambodia, where he met with the leaders of the 10 member states of the Association of Southeast Asia Nations (ASEAN), and attended the East Asia Summit, a gathering of leaders from ASEAN as well as six other Asia-Pacific powers. Read more about the President’s summit meeting in Cambodia here.