North Korean leader Kim Jong Un has been pictured in state media after weeks away from the public eye. The WSJ’s Alastair Gale tells us how Mr. Kim’s disappearance is being explained.

According to the Wall Street Journal, North Korean dictator Kim Jong Un was shown in public for the first time in weeks by state media on Tuesday, after an absence that fueled speculation he might have been sidelined or was suffering from a grave medical condition.

The 31-year-old leader was shown on the front page of North Korea’s main newspaper laughing and walking with a cane while talking to officials.

The accompanying report said Mr. Kim was giving “field guidance” at a new residential area for scientists. Such reports are a staple of North Korean state media and are designed to show the leader is signing off on major projects or giving final instructions.

The report showing Mr. Kim’s reappearance was published on Tuesday but wasn’t dated, which is common with North Korean state media. As such, it couldn’t be confirmed exactly when Mr. Kim appeared, but the images were the first of him in public since he attended at a concert on Sept. 3.

Previous North Korean state media reports have said the scheduled completion date of the housing complex shown in the images was the anniversary of the ruling party on Oct. 10. The latest report indicated the site had been finished and the facilities appeared to be complete.

The reappearance of Mr. Kim after his longest ever stretch out of the public eye follows a frenzy of speculation about his fortunes. With little hard information to go on—North Korean state media made only one brief reference to Mr. Kim’s “discomfort”—analysts, government officials and netizens produced theories ranging from the plausible to the bizarre. One rumor that surfaced on a Chinese Internet site claimed Mr. Kim had been assassinated by a North Korean official who has himself been dead for several years. 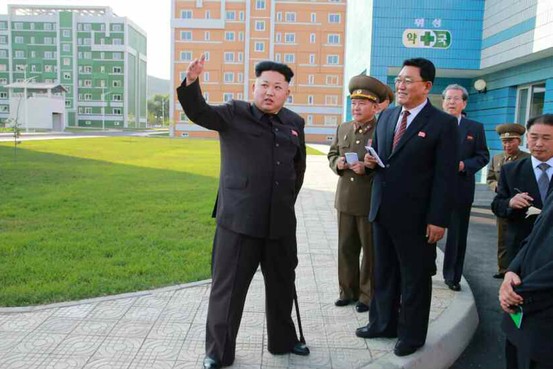 Speculation accelerated when Mr. Kim failed to appear for a gathering of top officials last week. Still, South Korean officials said they believed the leadership was stable and Mr. Kim was in charge despite his lack of appearances. A senior North Korean official said during a visit to the South earlier this month that there was “nothing wrong” with Mr. Kim’s health.

By showing Mr. Kim walking with a cane, the state media images appeared to confirm that the leader has had leg problems. South Korean media, citing unnamed intelligence officials, have reported that Mr. Kim has had surgery for ankle problems. Other reports have suggested he has had gout, which leads to difficulty with walking.

Mr. Kim was shown walking with a limp in July during a ceremony to commemorate the death of his grandfather. The limp was still clear in another appearance last month.

A Seoul-based orthopedic doctor said gout, known as “the disease of kings” for its prevalence among those who live on a diet rich in meat, sugar and alcohol, was the most likely explanation for the limp. High uric acid levels in the bloodstream cause the disease and can be hard to control, the doctor said, which could explain Mr. Kim’s public absence.

An external injury is another possibility, the doctor said. Less likely is degenerative arthritis from obesity, he added. The doctor declined to be named publicly.

Some Western press reports attributed Mr. Kim’s absence to a possible coup, although there were no indications of that, such as unusual troop movements. State media continued to laud Mr. Kim during his absence and North Korean officials attributed achievements such as a strong performance by the nation at the recently ended Asian Games to Mr. Kim’s guidance.

According to one former North Korean official who now runs a news service in Seoul with contacts inside the North, the intense focus on Mr. Kim’s recent whereabouts misses the point about a destabilizing change that has been occurring in North Korea’s leadership for many months.

Jang Jin-sung, who runs the online publication New Focus International, says Mr. Kim has become a figurehead for a group of senior officials known as the Organization and Guidance Department that have gradually taken power. One member of the group, Hwang Pyong So, led a delegation of North Korean officials that visited South Korea on Oct. 4.

While Mr. Kim will likely continue to appear in state propaganda as the leader, he has little power of his own, Mr. Jang said.

Still, analysts generally agree that the appearance of a member of the Kim family as leader is essential to the legitimacy of the regime at home, where they are portrayed as semi-deities that protect the nation from foreign aggression.

In the images published Tuesday in the Rodong Sinmun newspaper, Mr. Kim wore familiar black tunic and is shown giving instructions to senior officials. Mr. Kim is also shown in a group photograph with the scientists, who will move into the new housing, taken in front of statues of his father, Kim Jong Il, and grandfather, Kim Il Sung.

North Korea has emphasized the achievements of its scientists in the wake its third nuclear test in February last year and successful launch of a long-range rocket in December 2012.