Bush has clashed with rivals — including the Republican presidential frontrunner billionaire Donald Trump and top Democratic candidate Hillary Clinton — over use of the term “anchor babies,” a derogatory description of children born in the United States to undocumented parents.

Migrants’ rights activists see the term as a slur used by anti-immigration campaigners to describe the babies of those who sneak across the border to give birth, gifting their offspring US citizenship and enhancing the parents’ legal status.

But on Monday during a visit to Texas near the US border with Mexico, when responding to a question about whether the “anchor baby” row would hurt his ability to win the Hispanic vote, Bush said the situation has more to do with other immigrants.

“What I was talking about was the specific case of fraud being committed where there’s organized efforts — and frankly it’s more related to Asian people coming into our country, having children in that organized effort, taking advantage of a noble concept with birthright citizenship,” Bush said.

“My background, my life, the fact that I’m immersed in the immigrant experience — this is ludicrous for the Clinton campaign and others to suggest that somehow I’m using a derogatory term. 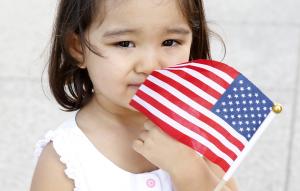 Megyn Shahi, 2, holds onto a U.S. flag during a special naturalization ceremony held at the Martin L …

“I support the 14th Amendment,” he said of the constitutional guarantee of citizenship to anyone born in the country.

Trump has called for possibly scrapping the law, saying birthright citizenship boosts illegal immigration. On Friday, he claimed 300,000 babies were born last year in the United States from undocumented immigrants.

That is lower than the 340,000 babies born in 2008 to unauthorized immigrant parents — about eight percent of all babies born that year — according to a 2010 study by Pew Research Center.

The organization also said Asians made up the largest share of recent immigrants at 36 percent of the total, surpassing the 31 percent who were of Hispanic origin. 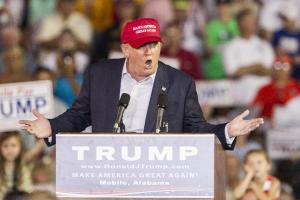 Some mothers were paying over $50,000 for packages designed to allow them to give birth in the United States, the Immigration and Customs Enforcement agency said.

Last week Bush sparked criticism when he told a conservative radio show that the United States needs “better enforcement so that you don’t have these, you know, ‘anchor babies,’ as they’re described, coming into the country.”