Republican nominee tries to court blacks and Hispanics, but another group that leans Democratic gets less attention.

Donald Trump has made overtures in the last few days to Hispanic and African-American voters, trying to whittle away the giant advantages Hillary Clinton enjoys among them.

There is a third group that gets less attention, but one that provides Democrats a similar strategic edge: Asian-Americans.

Asian-Americans are the nation’s fastest-growing racial group. More than nine million of them will be eligible to vote in November, up 16% from four years ago.

The bad news for Republicans is that this growth in the Asian-American electorate appears to be accompanied by an increasing tilt toward the Democrats. One national poll of Asian-American voters earlier this year found a 12-point increase in those who identify as Democrats since 2012, to 47% from 35%. 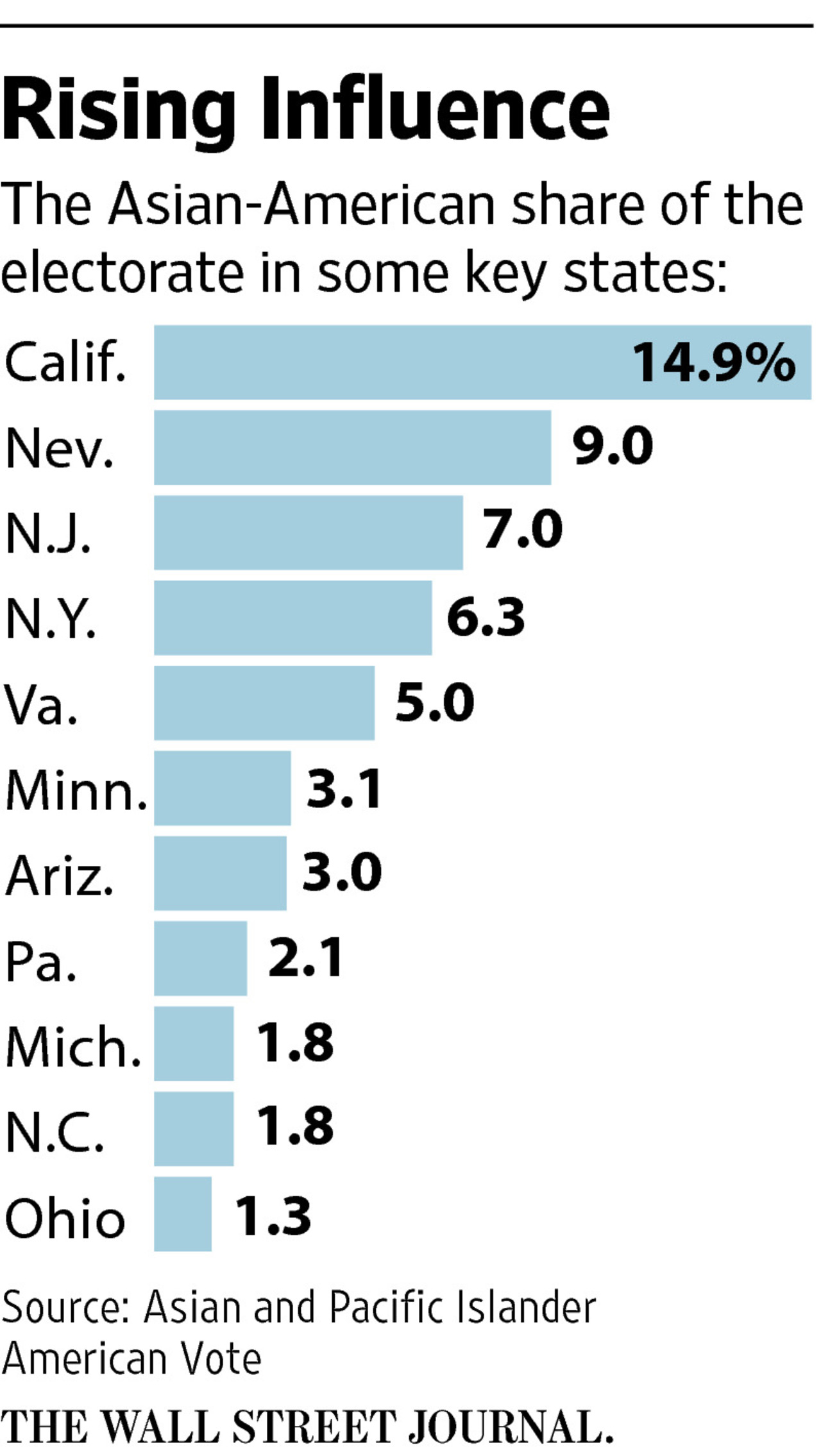 Can that matter? Ask Democratic Sen. Mark Warner of Virginia. He won re-election two years ago by the narrowest of margins, defeating Republican Ed Gillespie by fewer than 18,000 votes out of 2.18 million cast. Virginia’s large population of Asian-Americans likely provided the difference. They make up 5% of the state’s electorate, and a pre-election poll showed them going for Mr. Warner by a 2-to-1 margin.

For Mr. Trump and his party, Asian-Americans are another example of how his get-tough stance on immigration represents a two-edged sword. It has helped galvanize support and drive up enthusiasm among working-class whites, many of whom think immigration has damaged them economically and undermined the American culture they have known. Meanwhile, on the sliding scale of the diverse American electorate, votes gained there are offset by votes lost to groups who hear chants of “build that wall” as an ominous sign.

Mr. Trump and his supporters insist that his policies are directed not at immigration generally but at illegal immigration specifically, but they have had a hard time getting that message across. Over the weekend, his campaign appeared to begin softening its tone; his new campaign manager, Kellyanne Conway, said Mr. Trump wouldn’t necessarily stick with his pledge to seek deportation of 11 million undocumented immigrants.

Still, the hole he and his party faces appears to be deep, including with Asian-American voters.

A survey earlier this year by the Asian and Pacific Islander American Vote project, a nonpartisan organization that works to mobilize voters of Asian heritage, found that 61% of Asian-American registered voters held an unfavorable view of Mr. Trump, while a nearly identical share held a favorable view of Mrs. Clinton. The same survey found that 40% said they would vote against a candidate who expressed “strongly anti-immigrant views,” even if they agreed with that candidate on other issues.

Such readings frustrate Republicans who think Asian-Americans ought to have a more natural affinity with the GOP. While Asian-Americans are hardly monolithic—they include those with roots in the Philippines, Korea, China and Vietnam as well in the Asian subcontinent countries of India and Pakistan—many have a wide entrepreneurial streak that would seem in sync with Republican policies.

Surveys suggest they aren’t strongly rooted in either party, and aren’t especially liberal. The APIAVote survey showed 23% called themselves liberal, 19% conservative and a whopping 48% moderate.

But many of these Asian-Americans also are making their marks in the high-tech world, where Mr. Trump’s immigration policies are unpopular. Moreover, there are signs that Democratic outreach to Asian-Americans has simply been better than that of the Republicans.

So what difference does all this make, now and in the future? Nationally, the impact of Asian-Americans isn’t huge. They make up only about 4% of eligible voters. But in some key battleground states their impact will be significantly larger. In addition to Virginia, Asian-Americans make up 9% of the electorate in Nevada, 7% in New Jersey and 3.1% in Minnesota. In California, they make up almost 15% of the electorate.

Like Hispanics, Asian-Americans’ political activism hasn’t always matched their numbers, but that may be changing. The number of Asian-Americans running for Congress rose to 40 this year from eight just eight years ago. In one of the nation’s most prominent Senate races, Democratic Rep. Tammy Duckworth of Illinois, an Asian-American fluent in Thai and Indonesian, is seeking to knock off Republican Sen. Mark Kirk.

Long-term trends mean the impact of Asian-Americans will only rise. Immigration from Asia is rapidly overtaking immigration from Latin America as the largest source of new arrivals. The Pew Research Center says Asians already outnumber Hispanics among immigrants who have arrived in the last five years, partly because of a sharp drop in immigration from Mexico. By 2065, a Pew Research Center study says, Asians will outnumber Hispanics among all immigrants.

That’s the real reason Republicans ought to be worried about their standing with Asian-Americans. They are arriving as a full-fledged political force, and 2016 is only the start.