WATCH: The first-ever footage of the legendary giant squid in its natural habitat
Japanese researchers pursue the mythical creature 2,000 feet under the sea
By Chris Gayomali
Source: The WEEK 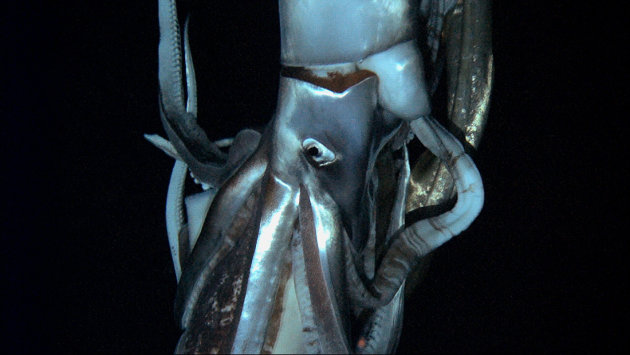 Reuters/REUTERS – A giant squid is seen in this still image taken from video captured from a submersible by a Japanese-led team of scientists near Ogasawara islands taken in July 2012, in this handout picture released by NHK/NEP/Discovery Channel in Tokyo January 7, 2013. The scientists have captured on film the world’s first live images of a giant squid, journeying to the depths of the ocean in search of the mysterious creature thought to have inspired the myth of the “kraken”, a tentacled monster. Picture released on January 7. Mandatory Credit. REUTERS/NHK/NEP/Discovery Channel/Handout (JAPAN – Tags: SCIENCE TECHNOLOGY SOCIETY ANIMALS) FOR EDITORIAL USE ONLY. NOT FOR SALE FOR MARKETING OR ADVERTISING CAMPAIGNS. THIS IMAGE HAS BEEN SUPPLIED BY A THIRD PARTY. IT IS DISTRIBUTED, EXACTLY AS RECEIVED BY REUTERS, AS A SERVICE TO CLIENTS. MANDATORY CREDIT. JAPAN OUT. NO COMMERCIAL OR EDITORIAL SALES IN JAPAN

Sailors’ accounts of the fearsome kraken thrashing around the waters with its arch-nemesis, the sperm whale, have long been the stuff of legend. And the legend was only fueled by the incredible difficulty of glimpsing the multi-tentacled cephalopod alive in its natural deep-sea habitat, where oxygen and light are scarce and the water pressure is deadly.

That’s why scientists are excited about new, first-time footage of the giant squid swimming around in the deep ocean. While the remains of monstrous specimens have been collected in museums around the world, it wasn’t until 2005 when a team of scientists, led by Tsunemi Kubodera of Japan’s National Science Museum, were able to photograph the 26-foot-long monster trawling the ocean depths for food for the first time in recorded history.

And later this month, the same team will premiere first-ever video of a similar beast spotted at a depth of 2,067 feet, just east of Chichi Island in the north Pacific Ocean. Check out a teaser above.

The three-man crew reportedly spent 400 hours in their submarine before they came across the massive, silver-colored giant squid, which was strangely missing two of its tentacles. More footage of the “holy grail” of sea animals can be viewed on the Discovery Channel on Jan. 27 as part of a new documentary, Monster Squid: The Giant Is Real.