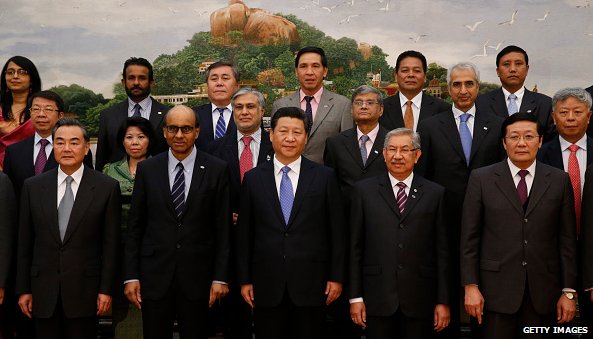 The Asian Infrastructure Investment Bank agreement was signed in October by 21 countries, including China

France and Germany are to join the UK in becoming members of a Chinese-led Asian development bank.

The finance ministries of both countries confirmed on Tuesday that they would be applying for membership of the Asian Infrastructure Investment Bank (AIIB).

Last week, the US issued a rare rebuke to the UK over its decision to become a member of the AIIB.

The US considers the AIIB a rival to the Western-dominated World Bank.

The UK was the first Western economy to apply for membership of the bank.

But German finance minister Wolfgang Schaeuble confirmed on Tuesday that his country would also be applying for membership.

France’s finance ministry confirmed it would be joining the bank. It is believed Italy also intends to join.

The US has questioned the governance standards at the new institution, which is seen as spreading Chinese “soft power”.

The AIIB, which was created in October by 21 countries, led by China, will fund Asian energy, transport and infrastructure projects.

When asked about the US rebuke last week, a spokesman for Prime Minister David Cameron said: “There will be times when we take a different approach.”

The UK insisted it would insist on the bank’s adherence to strict banking and oversight procedures.

“We think that it’s in the UK’s national interest,” Mr Cameron’s spokesperson added.

Last week, Pippa Malmgren, a former economic adviser to US President George W Bush, told the BBC that the public chastisement from the US indicates the move might have come as a surprise.

“It’s not normal for the United States to be publicly scolding the British,” she said, adding that the US’s focus on domestic affairs at the moment could have led to the oversight.

However, Mr Cameron’s spokesperson said UK Chancellor George Osborne did discuss the measure with his US counterpart before announcing the move.

Some 21 nations came together last year to sign a memorandum for the bank’s establishment, including Singapore, India and Thailand.

But in November last year, Australia’s Prime Minister Tony Abbott offered lukewarm support to the AIIB and said its actions must be transparent.

US President Barack Obama, who met Mr Abbott on the sidelines of a Beijing summit last year, agreed the bank had to be transparent, accountable and truly multilateral.

“Those are the same rules by which the World Bank or IMF [International Monetary Fund] or Asian Development Bank or any other international institution needs to abide by,” Mr Obama said at the time.