The Dalai Lama consecrated a Buddhist monastery Thursday in India’s remote northeast, amid Chinese warnings that the exiled Tibetan spiritual leader’s visit to a disputed border region would damage bilateral relations with India.

Nearly 10,000 people, some of them from neighboring Bhutan, greeted the Dalai Lama at the Thupsung Dhargyeling Monastery in Tawang district in the state of Arunachal Pradesh, Indian official Jemba Tshering said.

The visit to Arunachal Pradesh, which China also claims as its territory, has raised tensions between the nuclear-armed Asian neighbors. China’s Foreign Ministry has said the visit “severely harms China’s interests and the China-India relationship,” while India has cautioned Beijing to stay out of its internal affairs. 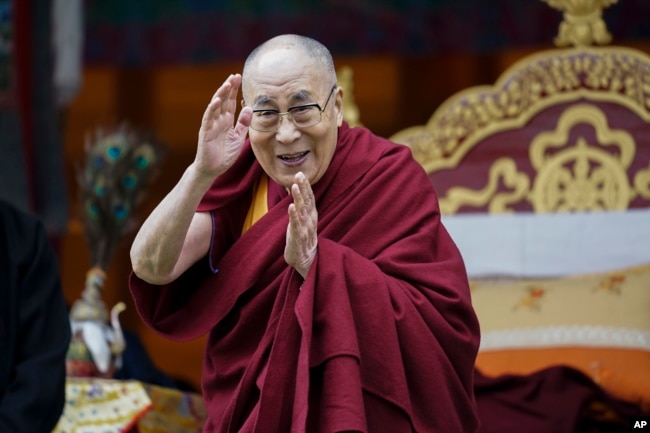 China considers the 81-year-old monk, who fled to India in 1959 amid an uprising against Chinese rule in Tibet, a separatist seeking Tibet’s independence. The Dalai Lama says he merely advocates substantial autonomy and protection of the region’s native Buddhist culture.

The Dalai Lama reiterated Wednesday that he, as well as his people, were not seeking Tibet’s independence, but are struggling to secure “meaningful autonomy” for the region from China.

“Firstly, we are not seeking independence. We are very much willing to remain within China,” The Telegraph newspaper quoted him as saying. “At the same time, the Chinese government must give us meaningful self-rule, autonomy and must take full care of the environment.”

Chinese Foreign Ministry spokeswoman Hua Chunying on Wednesday rejected arguments that the trip was solely religious in nature, and said China would lodge a formal protest with New Delhi.

The top elected official of the state of Arunachal Pradesh, Pema Khandu, accompanied the Dalai Lama as he addressed young monks on Wednesday. Khandu said China had no business telling India what to do and what not to do, the Press Trust of India news agency reported.

The visit is the Dalai Lama’s seventh to Arunachal Pradesh and his first since 2009. China has criticized previous visits, but they did not spark any major rift between the two countries.