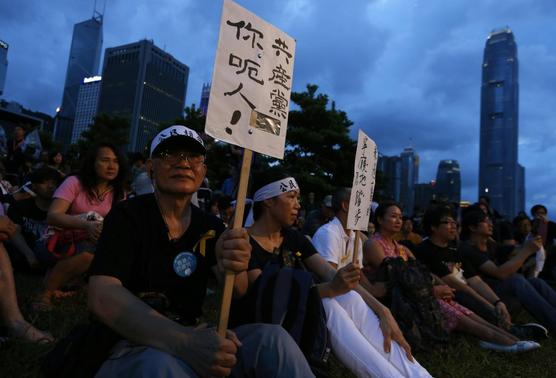 BEIJING (AP) — China’s legislature on Sunday ruled out allowing open nominations in inaugural elections for Hong Kong’s leader, saying they would create a “chaotic society.” Democracy activists in the Asian financial hub responded by saying that a long-threatened mass occupation of the heart of the city “will definitely happen.”

The legislature’s powerful Standing Committee said all candidates should be approved by more than half of a special nominating body in order to go before voters. That’s at odds with demands from Hong Kong’s pro-democracy camp, which staged a massive protest in July to press for genuine democracy in the Chinese territory over fears candidates would continue to be screened to assess their loyalty to Beijing.

Hong Kong has enjoyed substantial political autonomy since returning from British to Chinese rule in 1997, when China’s communist leaders pledged to allow the city’s leader, known as the chief executive, to be eventually elected through “universal suffrage” rather than by the current committee of mostly pro-Beijing tycoons. But China’s growing influence in the city’s affairs has sparked fears that Beijing won’t hold up its end of the bargain.

Hong Kong’s most high-profile democracy group, Occupy Central with Love and Peace, immediately announced that a plan to “occupy” the city’s Central business district would go ahead, without specifying a date.

Occupy Central has vowed to rally at least 10,000 people for the massive sit-in, which could still be months away because Hong Kong’s government must hold more consultations on Beijing’s guidelines and then formulate a bill to be passed by the city’s legislature. The group urged legislators to vote against it and “start the constitutional reform process all over again.”

“He has to be responsible to Hong Kong and to the central government,” Li said. “If Hong Kong’s chief executive doesn’t love the country and love the party, then that can’t work in one country.”

Under Sunday’s guidelines, Hong Kong’s 5 million eligible voters will be able to vote in 2017 for two to three candidates selected by the 1,200-member nominating committee. Then, the chief executive-elect “will have to be appointed by the Central People’s Government,” the Standing Committee said.

“Since the long-term prosperity and stability of Hong Kong and the sovereignty, security and development interests of the country are at stake, there is a need to proceed in a prudent and steady manner,” it said.

Willy Lam, an expert on Chinese politics at the Chinese University of Hong Kong, said that the requirement that a candidate is supported by more than half of the nomination committee “will rule out a pan-democratic candidate.”

“Only if it’s lowered to 20 percent can a pan-democratic candidate get in,” as there could be enough political diversity in the committee to back a more democratically minded person, Lam said.

Beijing’s announcement comes after a summer of protests and counter-protests that have gripped Hong Kong, including a rally two weeks ago by pro-Beijing activists to denounce Occupy Central as threatening the city’s stability.

Political tensions spiked in June when Chinese officials released a policy “white paper” declaring that Hong Kong’s “high degree of autonomy … comes solely from the authorization by the central leadership.”

Many read the policy paper as asserting Beijing’s dominance of Hong Kong’s affairs and hit the streets and the Internet in protest. Occupy Central drew Beijing’s rebuke by organizing an online referendum that received nearly 800,000 votes on how to pick the city’s chief executive.

On Sunday, organizers of a similar referendum in the neighboring Chinese-controlled city of Macau said 95 percent of 8,688 people had voted in favor of its leader being elected by universal suffrage in 2019. Macau’s incumbent leader, Fernando Chui, was elected to a second five-year term by a Beijing-friendly committee on Sunday.

By JACK CHANG and KELVIN CHAN