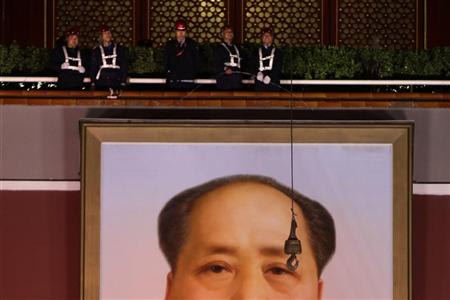 Reuters/Reuters – Workers prepare to remove an old portrait of China’s late Chairman Mao Zedong from Tiananmen Gate to make way for a new portrait of him during annual renovation works ahead of the 63rd National Day on October 1, in Beijing September 28, 2012. REUTERS/Jason Lee

BEIJING (Reuters) – The subtle dropping of references to late Chinese leader Mao Zedong from two policy statements over the last few weeks serves as one of the most intriguing hints yet that the ruling Communist Party is planning to move in the direction of reform.

Mao has always been held up as an ideological great in party communiqués, his name mentioned almost by default in homage to his role in founding modern China and leading the Communist Party, whose rule from the 1949 revolution remains unbroken.

Which is why the dropping of the words “Mao Zedong thought” from two recent statements by the party’s elite Politburo ahead of a landmark congress, at which a new generation of leaders will take the top party posts, has attracted so much attention.

The omission in the latest such statement by the powerful decision-making body, a Monday announcement that the congress next month would discuss amending the party’s constitution, has seen by some as sending a signal about its intent on reform. One of the constitution’s key platforms is Mao thought.

“It’s very significant,” Zheng Yongnian, the director of the East Asian Institute at the National University of Singapore, said of the removal of a reference to Mao Zedong Thought and the implications of that for the direction leaders were taking.

The wording has in the past talked about “holding high the banner of Mao Zedong thought and Marxism-Leninism” in carrying out the party’s work, and is often included at the end of statements almost as a mantra.

But the latest two statements mentioned only that the party should follow “Deng Xiaoping theory”, the “three represents” and the “scientific development concept”.

Late paramount leader Deng Xiaoping introduced the idea that China can be both communist and have market-based reforms, while the “three represents” refers to former President Jiang Zemin’s policy which formally allowed capitalists to join the party.

Mao Zedong Thought adapted the original theories of Marxism that grew out of industrial Europe to the conditions of largely rural China when Mao took over in 1949.

“Before the fall of Bo Xilai, that direction was not so clear. But now it’s become quite clear. I mean, less Maoism, but more Dengism,” Zheng said.

Bo, a former high-flying politician supported by leftists, was ousted this year in China’s biggest political scandal in two decades.

By removing Mao Zedong Thought, the top leaders were signaling a push for reforms, Zheng said, in the same way Deng introduced landmark market reforms in the late 1970s that turned China from a backwater into an economic powerhouse.

There was also no reference made to Mao thought in a previous announcement on the date of the party congress.

Doctrinal differences between reformist and leftist factions reflect an internal debate about the direction of the new leadership whose taking up of the reins of power starts at the congress opening in Beijing on November 8.

The debate has been under the spotlight since the rise and subsequent fall of Bo, who, as party boss of the southwestern city of Chongqing, drew support from leftists critical of aspects of the market-based reform agenda.

China heads into the congress with the economy heading for its slowest annual growth rate in at least 13 years, while social stresses, such as anger over corruption, land grabs and unmet welfare demands, stir protests.

State media, as well as experts close to the government, have made increasingly strident calls for bold reform to avoid a crisis, though nobody seriously expects a move towards full democracy.

This week, for example, the Study Times, a newspaper published by the Central Party School which trains rising officials, lauded Singapore’s form of closely managed democracy and its long-ruling main party for having genuine popular support.

“If you want to win people’s hearts and their support, you have to have a government that serves the people,” it wrote.

Despite his ruthless political campaigns in which tens of millions died, Mao, whose portrait looms large on Tiananmen Square, has always been largely revered as a charismatic ruler who stood up to foreigners and unified the country.

Mao’s legacy in China remains tightly guarded by a Communist leadership bent on preserving his memory to shore up their own legitimacy, which, unlike his, was not forged in war.

In 2003, on the 110th anniversary of Mao’s birth, Hu declared that “the banner of Mao Zedong Thought will always be held high, at all times and in all circumstances”.

Some cautioned that it may be too soon to write off Mao.

“This is just not possible,” said Wang Zhengxu, a senior research fellow at University of Nottingham’s School of Contemporary Chinese Studies in Britain, on speculation that Mao thought and Marxism-Leninism would be removed from the party’s constitution.

Despite China’s all-pervasive Internet censorship – “Mao Zedong” and “Mao Zedong Thought” are both blocked on microblog searches – some users were able to discuss the issue, with opinions split on the possible removal of Mao thought.

“Mao Zedong Thought is the soul of the People’s Republic of China … and it is a light leading people towards justice,” wrote one user.

Still, Singapore’s Zheng said Mao’s vision had become irrelevant as many Chinese were apathetic about him. The doctrine could be de-emphasized in the amendment to China’s constitution during the congress, he said.

“Only the left side cares about it,” he said. “For most people, for the young generation, they don’t care about it. The memory is gone.”