Chinese censors have taken the unprecedented step of shutting down three major live streaming services, including one owned by Sina Weibo, the Twitter-like social media giant with 300 million users in both text and video format.

The action came ahead of a major Communist Party meeting that will have some significant changes in top leadership positions later this year. But media experts said the reason for this decision may be much bigger than the immediate political need and include the party’s concerns about videos proving to be a stronger social media voice than text.

More bandwidth has given people more access to video, said Nick Admussen, Cornell University’s assistant professor of Chinese literature. “I understand why they [Chinese officials] feel that this is something that they need to manage because more people are using it, and videos can travel more quickly,” he said.

Two other companies affected by the latest round of restrictions include Phoenix Television’s ifeng.com and AcFun, who were ordered to undergo rectification and help create a cleaner cyberspace.

Explaining the reason behind the shutdown, the government said the video platforms were operating without licenses and showing content that violated the standards laid down by the State Administration of Radio, Film and Television.

“It is not uncommon in China for companies to violate rules that they don’t think will be enforced and be able to get away with it for a long time,” said Scott Kennedy, Director, Project on Chinese Business & Political Economy at the Center for Strategic & International Studies.

“{A] Lot of it is about actual inappropriate sexual content, not inappropriate political content. What basically they are looking at is content and looking for people who are behaving like television stations even though they are not,” said Jacob Cooke, CEO of Web Presence in China, a Beijing based consultancy.

All television, radio and newspaper media is state controlled in China. But a section of live streaming platforms, which are run independently, had began to rob state TV of a big chunk of audience both because they reported real time events without waiting for clearances from high officials and they showed salacious and sexually provocative content. Authorities have a reason to fear they might emerge as independent TV far beyond government control even if they did not show much political news, analysts said.

Users of Chinese live streaming facilities constitute a virtual world of 325 million people. A significant number of people make videos, mostly with their phone cameras recording real life events or organizing special shoots before uploading them to some 200 portals. 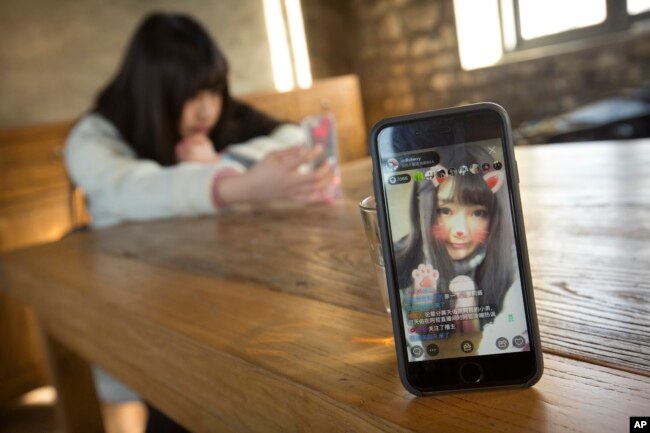 (Photo above) – A smartphone shows online web performer Wang Weiying, 18, as she broadcasts a live stream from her smartphone in a cafe in Beijing

The government decision still leaves a large section of live streaming services operational. They include major players like Huya, Panda.tv, Yinke, YY Live, Douyu and Huajiao. But Beijing’s move will force these platforms, which often test the patience of censors with sexually and otherwise provocative content, to tone down their programming and cut out political discussion, analysts said.

This will likely mean a smaller audience seeking and running after TRPs resulting in the business death spiral for several platforms, analyst said. One such portal, Guangquan, which was once valued at $70 million, collapsed recently because of intense competition and high operating costs. 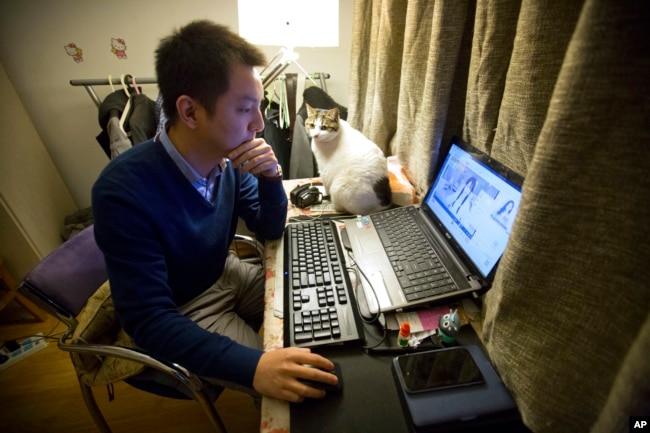 (Photo Above) – Office worker Zhai, 28, who asked that only his last name be used, watches a live web stream from a Korean web performer on his computer at his apartment in Beijing.

Industry watchers are debating how social media companies, which are known to be closely connected to the Communist party, went wrong and ended up being on the other side of the red line.

“I do think they are connected pretty deeply with the State, and that doesn’t mean you can’t have a squabble inside the family or different sides. It probably means that the authority will win out in one way or the other,” Admussen said.

He said clearly, the government felt these companies were not doing enough to comply with government standards. “Media should have the surname of the party. They are just one family,” Admussen said.

But the government may also lose quite a lot if it curtails the freedom of live streaming companies and social media outlets like WeChat and Weibo beyond a certain extent. Social media has become the eyes and ears of the authorities, telling them what is going on in this giant sized country, analyst said.

“Authorities also rely on WeChat and Weibo to take the pulse of public opinion on hot-button issues, and they can’t do that if they totally kill off the platforms’ liveliness and drive away users,” said Christopher Cairns, a scholar at Cornell University.