The robots will see you now

A surge in New Zealand’s elderly population is on the way, yet health and home-care services are already stretched. A joint research project between New Zealand and South Korea—which is already experiencing the demographic swing that awaits us—is investigating one solution: robots.

Lillian Neilson loves those old songs, the waiata from her youth in Gisborne. The staff and therapists of Selwyn Village in Point Chevalier, Auckland, sometimes sing or hum along with her, turning to their phones to dig out words she’s forgotten.

But Neilson, 84, a mother of four and a former maternity nurse, doesn’t know any other Māori residents in the rest home, and few add their voices to hers.

“I do feel lonely, so I generally come in my room and I sing my songs. I put the telly on and sing the music that comes over.”

So when it’s her turn to have Paro, a fluffy robotic Canadian harp seal with large, fathomless eyes, she’ll sing a song to him.

In the living room of the rest home, she shows me how the robot responds. Deceptively complex and comfortingly heavy, Paro recognises words, and adapts his behaviour to everyone who holds him. He’ll even squeal and squirm if you absent-mindedly hold him upside-down.

Neilson knows just the right spots to scratch to make him wiggle happily. People aren’t meant to kiss the seals, but the fur on his head is nevertheless streaked pink from someone else’s lipstick.

“He gives you hope,” she says. “You’re just sort of sitting here on your own, falling asleep, but if you have something like this you’re inclined to talk, and he’ll give you an answer.”

At this, Paro opens his eyes and bats his long lashes, and Neilson is delighted.

“Look at those beautiful big eyes,” she says, and he mewls back. “Aren’t you pretty? My goodness. We’ll have a hongi now.”

She brings her nose to the seal’s black-button one. 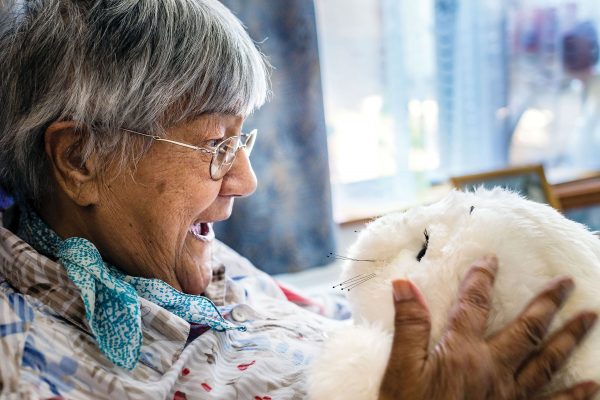 The seal has started to wriggle again.

“If they were to talk back we’d get the shock of our lives,” she says to me. “It’s marvellous, really. They make lonely people happy. He makes me happy.”

She looks back down to Paro.

“Would you like a cup of tea? Coffee? Milo?”

But Paro has stopped purring and lies still, heavy on her lap like a fat, sleeping puppy.

The seal opens his eyes, flaps his tail, bobs his head at her, and squeals.

He is so good, she says, for people like her, who sit here and watch the time go by.

“I talk to stuffed animals and real animals here. And I was a singer. I sing to myself. I sing a bit louder but people sit in the chair and fall asleep.

“I think of my grandmother, who just used to sit there. We’d make a hell of a lot of noise around her, but she’d enjoy it. And when we weren’t singing or anything, she’d ask if we were sick.”

Despite care facilities’ calendars of activities, outings and entertainment, those older people who live in rest homes or who need advanced care still miss out on participating in that regular bustle of family life. Paro, Neilson says, helps slow hours pass by.

“It helps the day. The day becomes shorter. Doesn’t it? Yes. Say yes.”

She’s talking to him again, lapsing into a lull for a few moments as the seal gazes at her. Then she turns back to me, and says: “I used to be a singer. I used to sing in our church choir. You’ve heard of Daphne Walker?”

The Robots Are Coming…

and they are coming to watch over our elderly.

Around the world, lifespans are lengthening, the proportion of elderly in the population is increasing, people are developing more complex healthcare needs, and more are living alone. Meanwhile, the price of looking after our elderly is rising. The true cost of caregiving has long been concealed, as it was carried out mostly by unpaid female family members in the home or underpaid women working in aged-care institutions. Now, it’s difficult to see how the shortfall will be met.

Most people choose to stay in their own homes as they age, which is the healthcare system’s preferred option, too; people are happier, and it costs less than institutional care. But who will watch over Nana, and keep her company?

Robotics holds the answer. It’s likely that therapeutic healthbots such as Paro will become increasingly common, along with others that can offer monitoring, entertainment, connection and companionship.

Hilda Johnson-Bogaerts, general manager of the Selwyn Institute of Ageing and Spirituality, says the swiftness with which Paro dissolves a low mood is striking. He has different impacts on people with different levels of cognitive impairment, but generally Paro reduces stress and lowers blood pressure. At Selwyn, he usually visits a resident who isn’t well, has had a fall, or is feeling down.

“If they are not feeling very confident, or someone is a bit sad, Paro usually breaks it,” says Johnson-Bogaerts. “They just start smiling and interacting with him and cuddling him. It changes your focus from what you were doing or thinking about to the here-and-now interaction.”

Paro also encourages light-hearted chat, and is a catalyst for connection between staff, visitors, families, and residents. During New Zealand Geographic’s visit, the seals are stacked away when it’s time for a cup of tea and a muffin. With Paro gone, the room suddenly feels emptier. The silences are heavier. People talk, but there’s not as much happy, candid banter. It’s possible the residents were just focused on their snack, but nearly a decade of research from the University of Auckland backs up the social benefits of robots.

Neilson, her fellow residents, their families, and Selwyn staff are at the centre of world-leading research into healthbots, run by the university’s multi-disciplinary Centre for Automation and Robotic Engineering Science, or CARES, which investigates how robots can improve society. The Selwyn Foundation runs 12 villages across the upper North Island, and researchers have been trialling different healthbots in its facilities since 2008.

CARES, which includes about 30 staff from departments including engineering, pharmacology, gerontology, healthcare, linguistics, psychology and more, was an unusual group when it first began.

“It doesn’t seem quite so crazy now,” says robotics professor Bruce MacDonald. “But 10 years ago, it was a much more crazy thing.”

MacDonald says the idea behind healthbots is that robots will help human caregivers, not replace them.

“We don’t think it means you don’t need human help, but what we think is the robot could be doing monitoring, and [carers]can look remotely and see what’s been happening with that patient during the last few days. What are they doing, what are the trends, do we need to do more? That can enable a carer to look after more people.”

CARES works in partnership with several South Korean research institutions and robot manufacturers. South Korea provides the robot-making expertise, and New Zealand the network of rest homes as testing grounds. Both countries have received funding from their governments to collaborate on healthbot projects, and both work on social robotics research and software programming.

As robots become more lifelike, we relate to them better—until they are almost human in gesture and appearance. That’s when we find them very, very creepy—when there’s something about them, too subtle to detect, that’s just wrong. This is the uncanny valley, a concept described in 1970 by roboticist Masahiro Mori. He concluded that robot makers shouldn’t attempt to mimic human beings.

In 2011, the Selwyn Foundation hosted a large-scale multi-robot trial funded by the New Zealand and South Korean governments. The six studies—which involved 200 people and 31 robots in five different models, including the Japanese-made Paro—placed robots into public spaces, residential care facilities and residents’ apartments, where they measured activity, vital signs and falls.

Survey results had previously shown that one of the rest homes’ big problems was loneliness. Paro made such a difference to the residents in the study that, afterwards, Selwyn Village bought 13 of their own.

“He doesn’t work for everybody,” says Elizabeth Broadbent, a social robotics expert at the University of Auckland, “but when he does, he’s very effective.”

The rest homes also have cats, a dog, and birds, but these pets do not cooperate in the same way as Paro. The seal doesn’t bite, scratch, shed, run away, trip people, require feeding, or, as is the case with cats, disappoint you with a supercilious attitude. Paro exists purely for the pleasure of your company.

The study also suggested there’s something about a robot that’s inherently more attractive and interesting to us than animals. A dog was present during the study, but the residents talked to, talked about, and touched the robot significantly more than the pup.

It was the first time the effects of a robotic animal had been compared to a live animal. Paro, made in a lab, may be better at addressing some of the unmet needs of older people—particularly when it comes to isolation, the scourge of old age.

Source: Read the full story at