Advances in earth observation, digital connectivity and computing power provide an array of information, from detailed topographical maps to transportation use, that was previously unimaginable, geospatial experts said at a World Bank Conference on Land and Poverty.

The information collected can be instrumental to helping establish property records and land titling systems in countries where there is no formal ownership or land-use documentation.

Survey-mapping drones may look like toys but are powerful machines having a huge impact on land-use planning in Africa, said Edward Anderson, a senior World Bank disaster management expert.

The mapping exercise, budgeted at $2 million in 2005, was completed at a tenth of the price by local university students operating the small, light, unmanned drones, Anderson said.

“Coastal zones are developing and urbanizing so quickly, waterside areas are being developed into hotels, residential properties,” he said.

“Until now, there was no way of quantifying this change and making comparisons,” Anderson said. 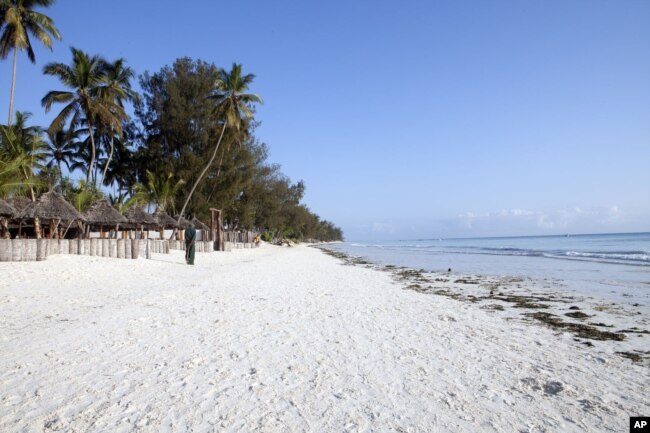 A villager walks along a deserted beach near a seaside resort on the East African archipelago of Zanzibar, Oct. 12, 2010.

While more than 87 percent of the land mass of Europe is mapped at a local level, such maps exist for only about 3 percent of the entire African continent, he said.

A project using drones in Mauritania, a country twice the size of France but with a population of less than four million, has allowed authorities to document the massive growth of cities such as its capital, Nouakchott, said University of Arizona professor Mamadou Baro.

Originally established in 1959 with fewer than 5,000 residents, Nouakchott is the largest city in the Sahara and home to more than 1.5 million people.

“This is placing huge pressure on social infrastructure and chaos in the development of the city,” Baro said. “Drones are very helpful in attempting to manage and track this kind of enormous growth.”

Private companies that collect data as part of their businesses are being encouraged to share with state planning authorities as well, said Holly Krambeck, a World Bank transport planning expert. GPS data collected by taxi drivers is helping to design plans for infrastructure and roads in countries such as Brazil and in North Africa, she said.

The shared data comes through agreements with technology companies such as Grab that operates ride-hailing and logistics services apps in Southeast Asia, including the Philippines, Thailand, Vietnam and Indonesia.

In Tanzania, improved mapping data revealed that up to two-thirds of properties in secondary cities were not on the tax rolls, they said.