FILE – Kem Sokha, leader of the Cambodia National Rescue Party (CNRP), greets his supporters at headquarters before he goes to register for next year’s local elections, in Phnom Penh, Cambodia, Oct. 5, 2016.

Mild mannered with a focus on village economics and social issues, Kem Sokha has eschewed the extravagant lifestyles of Cambodia’s political elites, commonly referred to as Khmer Riche, preferring more modest values that have endeared him to rural voters.

Whether that’s enough to unseat Hun Sen in general elections next year will be tested in four months when thousands of local village posts are contested at commune elections, primarily between the CNRP and the ruling Cambodian People’s Party (CPP).

Communes are clusters of villages, and in a country with no formal public opinion polls, these local elections offer the best indicators as to how the two main political parties are performing. 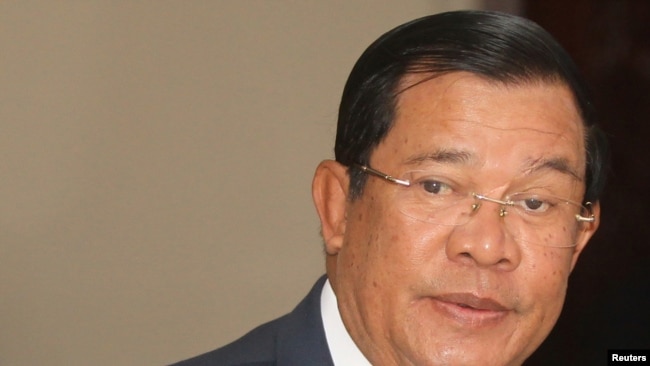 Cambodia’s Prime Minister Hun Sen arrives before a plenary session at the National Assembly of Cambodia, in Phnom Penh, Jan. 31, 2017.

Hun Sen and the CPP maintained control in controversial 2013 elections that the opposition disputed with allegations of cheating. The CPP stayed in power with a substantially reduced margin, and the opposition needs to lift its tally by just seven seats in the 123-seat National Assembly during next year’s general election if it is to form a government.

That prospect has rattled Hun Sen, and Sam Rainsy subsequently faced a barrage of defamation suits backed by the prime minister, resulting in convictions and two jail sentences.

Those cases were widely criticized by civil society groups for being politically motivated and backed by a judicial system often criticized for a lack of impartiality and transparency.

Sam Rainsy’s decision to step down was made after Hun Sen announced he would introduce legislation banning people with criminal convictions from leading political parties and, according to Sam Rainsy, that would have resulted in the dissolution of the CNRP.

The government has denied allegations of election cheating and insists its courts are impartial and convictions are the result of an independent judiciary. When contacted for comment, a government spokesman was unavailable.

Ren Chanrith, a political coordinator at the Youth Resource Development Program, said legal posturing was aimed at preventing Sam Rainsy from contesting the June 4 commune and general elections, but his resignation would only inspire Kem Sokha and the CNRP faithful.

“So the resignation of Mr. Sam Rainsy (will) just make the opposition party become stronger and their activists and supporters will do more to get a successful (result) in the upcoming election. So you know, they will do more,” he said.

The prime minister insists it is his ability to ensure security that led to an unprecedented era of economic growth since three decades of war ended in 1998. It’s an argument that still wins votes.

He has also persistently warned of a return to civil conflict if he fails to win the election, but such threats carry far less weight among the nation’s youth and don’t resonate among older voters like it used to. 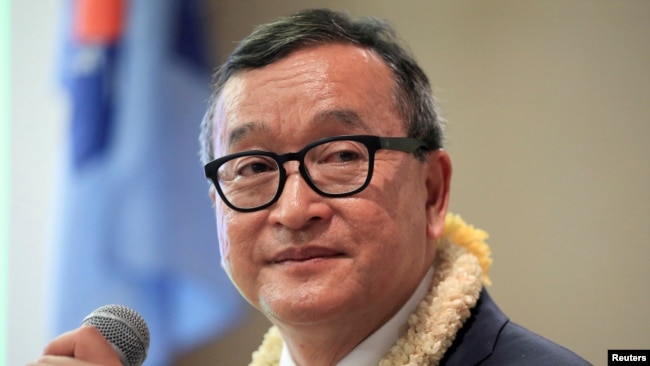 City versus the country

Importantly, analysts say, Sam Rainsy has secured the urban and youth vote for the CNRP, thanks in part to changing demographics and a postwar baby boom. More than 65 percent of the population is younger than 35 and many have grown tired of Hun Sen’s autocratic-style.

CNRP advocate Van Thorn said Sam Rainsy’s resignation was disappointing but was necessary to save the party and position the opposition ahead of the commune elections, where he expects Kem Sokha to do well.

“If we can look to the state of the new commune elections, I am kind of sure the CNRP will win a lot of seats and this will help the CNRP move ahead towards the national elections because generally in the countryside, almost everywhere in Cambodia, people are now more interested in the politics,” he said.

Sam Rainsy’s resignation took many by surprise, including Billy Chia-Lung Tai, an independent human rights consultant at CL Consulting who suggested there might have been some discontent with his performance within CNRP ranks.

A former investment banker and finance minister, Sam Rainsy is known for his skiing holidays and taste for the good life. He spends most of his time in self-imposed exile in Europe.

That stands in stark contrast to most Cambodians, particularly in the countryside, where issues such as illegal logging, land grabbing, corruption and a yawning wealth gap will dominate electioneering.

Forty percent of this country’s population lives below the poverty line.

To win control of the government, Kem Sokha and the CNRP must improve in the countryside where Hun Sen is at his strongest with 20 years of peace and an older generation of war veterans behind him.

“Strategically I feel, the CNRP would feel they’ve got the urban vote kind of locked down,” Chia-Lung Tai said. “They’ve probably reached all the people that they could convert and they’re really trying to go for the rural sector and I would agree that Sokha, Kem Sokha, is a much better candidate for that.”

“That’s going to be quite significant, and I have a nagging feeling that they will do everything above or below board to make sure that doesn’t happen,” Chia-Lung Tai said.

Molyny Pann contributed to this report.