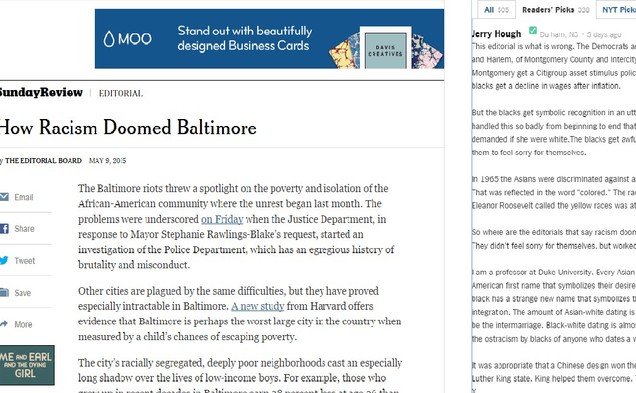 By Rachel Chason and Amrith Ramkumar

Jerry Hough, James B. Duke professor of political science, posted a controversial comment Sunday on a New York Times editorial titled “How Racism Doomed Baltimore” that ran last Saturday. The comment on the editorial—which focused on the idea that “the poverty and isolation of the African-American community” in Baltimore was a major cause of the riots sparked by Freddie Gray’s death—has led to a flood of discussion among students on social media.

“I am a professor at Duke University. Every Asian student has a very simple old American first name that symbolizes their desire for integration. Virtually every black has a strange new name that symbolizes their lack of desire for integration. The amount of Asian-white dating is enormous and so surely will be the intermarriage. Black-white dating is almost [non-existent] because of the ostracism by blacks of anyone who dates a white,” one portion of the comment reads. The rest of the comment can be viewed below.

Hough confirmed to Samantha Lachman, Trinity ’13 and a reporter for the Huffington Post, via email that the comment was his at the time the article originally ran, and responded to a request for comment made by The Chronicle with an email late Friday night.

He noted that the main motivation for his comment was that the editorial—rather than aiming to hold the mayor accountable as occurred in the aftermath of protests in Ferguson, Mo., in 2014 after Michael Brown’s death—blamed racism entirely for the events that occurred in Baltimore.”The context was the editorial on Baltimore which instead of calling for the resignation of the mayor as happened in Ferguson—and, in my opinion, both should have resigned—blamed everything on white racism,” Hough wrote. “I thought it was an outrage when in Baltimore they were following the old game of trying to injure a rowdy prisoner without getting marks on the prisoner by throwing him around the van.” Michael Schoenfeld, vice president for public affairs and government relations, responded to Hough’s comment on the editorial in an email Friday evening.

“The comments were noxious, offensive and have no place in civil discourse. Duke University has a deeply-held commitment to inclusiveness grounded in respect for all, and we encourage our community to speak out when they feel that those ideals are challenged or undermined, as they were in this case,” he wrote.

Schoenfeld also explained that “at the same time, as noted in the Faculty Handbook, every faculty member at Duke has a right ‘to act and to speak in his or her capacity as a citizen without institutional censorship or discipline.'”Hough earned his bachelor’s degree, master’s degree and doctorate from Harvard University, before eventually joining the Department of Political Science in 1973. He was awarded the title of James B. Duke Professor—an honor bestowed to an elite group of professors comparable to the distinguished professor title at many other universities—in 1982 and was especially noted for his knowledge of politics in the Soviet Union.This is not the first time he has commented on controversial issues related to race relations. In 2001, after The Chronicle ran an advertisement opposing reparations for slavery and many criticized the decision, Hough wrote a letter claiming that asking for reparations reinforced stereotypes about the black community.In his email to The Chronicle late Friday night, Hough wrote “ignorant I am not,” citing his experience living on the West Coast and traveling to Asheville, N.C., several times from 1940 to 1960. He also explained that he taught in the 1960s from a “pro-black perspective,” the first book he assigned in his first class in 1961 was “Black Like Me” and that he is currently writing a book that has two chapters on the changing definition of race.”The point I was raising was why the Asians who were oppressed did so well and are integrating so well, and the blacks are not doing as well. The comments have convinced me to write a book which will add the Asians to all the research I did on blacks,” Hough wrote.Junior Nelson Winrow—who originally posted a picture of Hough’s comment in the “All Duke” Facebook group Thursday evening—wrote in an email Saturday afternoon that Hough identifying himself as a distinguished faculty member at Duke made the comment even more disappointing.”Seeing a James B. Duke Professor of Political Science use his position at this institution as clout to make sweeping generalizations about a full 31 percent of the undergraduate population is painful,” Winrow wrote. “What Professor Hough said was ignorant to the experiences of the students he teaches, and his conduct shows a blatant lack of respect to large swaths of the Duke student body. It was that personal feeling of disrespect that inspired me to first post the picture in the All Duke page.”

Winrow also explained that an email from President Richard Brodhead and Provost Sally Kornbluth sent March 26 to all students urging students, faculty and staff “to embrace the shared responsibility for creating the community we want to be” motivated him to post the comment on the Facebook page. Winrow included an excerpt from the email in his original post in the Facebook group.

He also noted in his email Saturday that Hough’s comment served as another reminder of the need to increase diversity among faculty.

“It would be naïve to think that Professor Hough is the only professor who feels this way. According [to an article May 8 in The Chronicle] titled “Academic Council tackles faculty diversity in final 2014-15 meeting”, only 52 percent of the Black/Latino faculty feel like their research/scholarship is valued. When you consider that there were zero African-American Masters or Ph.D. candidates in the Economics department this year, and that there are only 2 African-American faculty members in each the Computer Science and Political Science departments, it becomes clear that although the Duke administration has made numerous public commitments to diversity, it has yet to put them into action among its faculty,” he wrote.

In addition to starting discussion among students, Hough’s comment on The New York Times editorial caused Mark Anthony Neal, professor of African and African-American studies, to post a picture of the comment on his blog Wednesday.

The caption of the post reads “One of the reasons #IStandWithSaidaGrundy is that there will not be a mumbling word from my institution for this example of #AcademicFreedom. In the words of Eduardo Bonilla-Silva, microagressions = micro-nooses–Mark Anthony Neal.”

Don Taylor, associate professor in the Sanford School of Public Policy, also responded to Hough’s comment on his blog with a post titled “Academic Freedom, Racism and Bad Science.” “The students deserve better. And coming on the heels of the noose incident at Duke this Spring, and subsequent adjudication that concluded the act was caused by ‘a lack of cultural awareness‘ this has been a very hard year at Duke for many black students. I just want to say to our black students that I am sorry, and that I am glad that you are at Duke,” one portion of the post reads.Another issue that arose from the discussion that was sparked by Hough’s comment was how faculty should cite student experiences when crafting an argument.”As faculty members, we must be especially careful when using our own students’ lives and experiences when trying to make a point,” Michael Gustafson, associate professor of the practice of electrical and computer engineering, wrote in an email Saturday morning. “I think Professor Hough’s public statements in this case could make it difficult, if not impossible, for some students to feel they would be appropriately respected for their own academic talent, intellectual contributions, and hard work in his classroom.”Jack Knight, chair of the Political Science department and Frederic Cleaveland Professor of Law and Political Science, and Georg Vanberg, director of undergraduate studies for the department, sent an email to political science students Monday evening in response to Hough’s comment.”A few days ago, a research professor in our department, Jerry Hough, posted noxious and repugnant comments on the New York Times website in response to an editorial on the recent unrest in Baltimore,” one portion of the email reads. “We, like so many members of the Duke community, were offended by these remarks. We are writing to you today to emphasize that these comments do not reflect the values of the Political Science Department at Duke….We want to reassure you that we will be vigilant in making sure that the kinds of prejudice represented by these comments will not be reflected in the conduct of faculty in the classroom.” The entire email can be viewed below.

Update: This article was updated to reflect that Hough confirmed to Lachman via email that the comment was his, rather than Lachman merely confirming the information, again at 5:15 p.m. Friday to include Schoenfeld’s comment, Saturday morning to add the comments from Hough and Gustafson and the information about Taylor’s blog post, Saturday afternoon at 1:50 p.m. to include Winrow’s comments and Monday evening to include the email from the Political Science department.