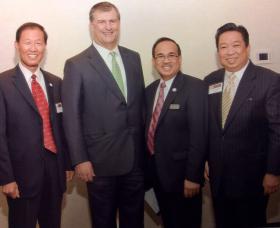 Robert Hsueh, the D/FW International Airport board chair who was a longtime leader of the North Texas Asian-American community, has died.

“Robert connected our Asian community with corporate America, and gave opportunities to our members in terms of procurement, contracting, doing business with the different public agencies here in the Metroplex, and most especially with the airport,” Galileo Jumaoas, president of the Greater Dallas Asian American Chamber of Commerce, told KERA.

Here are highlights from his D/FW Airport bio: